When you say “VFX” to someone, it wouldn’t be their first instinct to differentiate game VFX from movie or cinematics VFX. In fact, most people don’t really recognize the effects in games as VFX. But of course, they are!

VFX in movies is getting harder and harder to spot, they say that the only VFX you ever see is bad VFX. Or the ones that are so far from the possible that it must have been created by an artist and rendered for your viewing pleasure.

But in games, of course, we recognize everything as computer generated. And VFX is a huge part of the games industry. Without it, games would be pretty colourless! The real difference between games and movies is their purpose and how they are used. And in games, they are a language unto themselves.

The Tools of the Trade

To start with something simple, let’s look at the tools used by VFX artists across both industries. And it’s straightforward.

Take Houdini, a tool for simulations. Whenever you see VFX water or fire, smoke or snow, it’s a decent chance that it was created in Houdini. However, in movies, Houdini would be used for the simulations, and they’ll likely use another program to composite it into the full shot.

In games, it’s a little different. These tools are more like additions onto the main workflow. This is because the majority of the work is conducted in-engine, as each game would have its own. For a game artist, things like Houdini and Substance Designer are complementary tools that are added onto the game’s engine.

It’s an adaptive process for them. While movie VFX artists have some level of luxury in choosing the program they most prefer.

A Frame versus An Environment

For movies or cinematics, VFX serves as an augment. An upgrade and enhancement to the shot that already exists. It is viewed by every single spectator and audience member from the same spot, at the same time, in the same way.

This is probably one of the biggest differences between game and movie or cinematics VFX.  The incredible VFX that populates a movie is only ever created to be viewed at that moment, from a single angle. Game VFX artists must create these effects with consideration to a 3D environment. It could be seen from any angle, and it must be seen to react naturally with other objects in the environment.

In a movie, the only limitation to VFX is time and budget. As long as it can be rendered in time and composited in, that element can be as complex as you want it to be. It can be multiple simulations containing millions of particles, and thousands of elements inside it. If you can get that rendered, it can be included.

In games, every VFX is measured against the limited resources of a live-running machine. Game VFX artists must create their work, all while considering and testing the game’s resources and hardware limitations.

There is a minimum frame rate, typically 30 or 60 frames per second (fps), that needs to be maintained. You can include an incredible water simulation, for example, but if it completely ruins the frame rate, it has to be simplified or removed.

Probably the biggest difference between creating movie and game VFX is their purpose. Of course, all VFX serves a visual purpose. An explosion isn’t hard to decipher, but it’s more than that. In games, visuals are a vernacular of game language all on their own.

For movies, the visual communication is present, but it’s not nearly as important. These things are often explained in one way or another.

However, if you told a gamer to imagine spikes and what that means in game, they would tell you danger and damage. Perhaps even instant-death like in the older Super Mario games. Everything tells players something, and it’s a long-standing shorthand language that has developed over the years of the games’ industry.

Green usually means healing, blue is probably a shield. Purple, red, black, often mean damage and danger. But for a game VFX artist, it’s not just simply applying a colour to an effect. VFX in games must serve as a clear, visual communication of what is happening.

Shades of green and their context can change their meaning entirely. One pot of green is a fresh healing draught and the other, a bubbling acid grenade! The context and subtleties must all be considered and applied through the game by these artists.

It’s an aspect of game design, and these things are taught to the player through experience. And it’s all created in service of the final gameplay experience.

These are just a few of the key differences in delivering game VFX and cinematics VFX. If you’d like to learn more about VFX, and what it can do for your project, get in touch! You can also find some of our other services, such as full-cycle game development and co-development, on our service page. 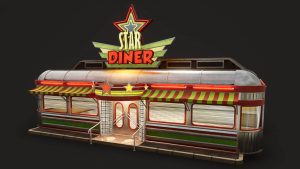 Behind the Magic: Destroy All Humans 2 Co-Development

Our work on Destroy All Humans 2! What Should a Good Video Game Script Have?

Video games have come a long way since